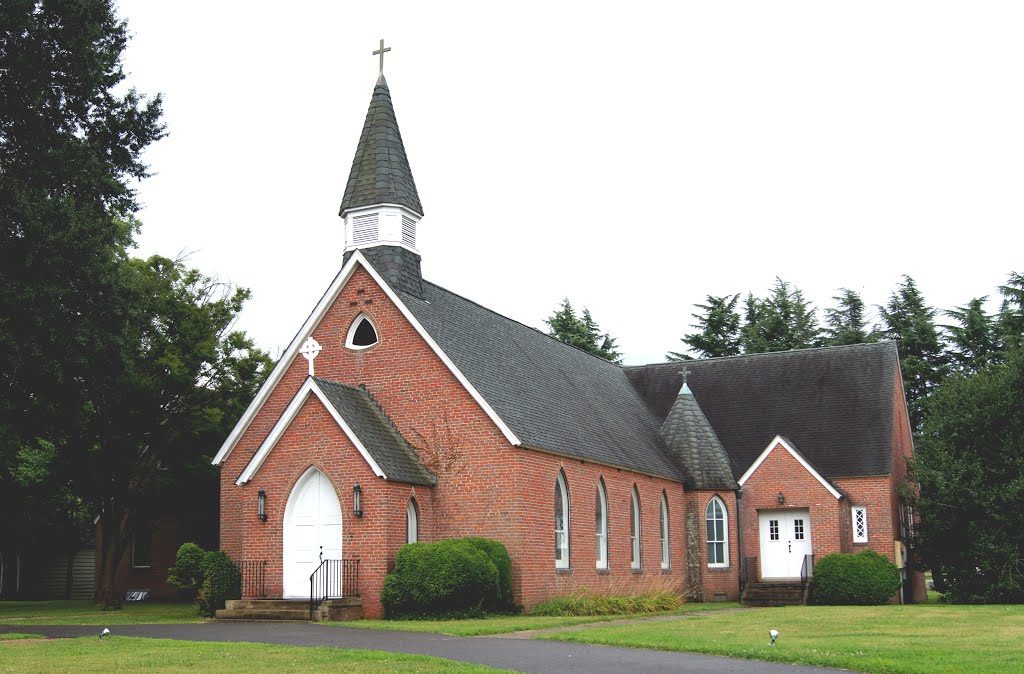 St. James Episcopal Church, located on Route 3 in the town of Montross, was established in 1850 when Montross Parish was designated by the Council of 1850 as being separate from Cople Parish. The Parochial Report of Cople Parish for 1849 states “The work on a new frame church, of good dimensions, has been commenced in this parish. The edifice is to be erected at Westmoreland Court House (Montross). And in the course of a few months, will be ready for the use of Her congregation.” Bishop John Johns consecrated St. James on April 22, 1850.

In the Bishop’s report, he wrote the following: “I consecrated St. James Church, Westmoreland Court House, and preached…This, it will be observed, is the second church which during the conventional year (St. Peter’s, May 31, 1849) I have consecrated in Westmoreland County, a fact which furnished some compensation for the feelings experienced on the ride between the two, when my attention was pointed to a pile of rubbish which marked the site of one of the old Churches of this region (Pope’s Creek Church) and I listened to the painful story of its desecration and ruin. The change now indicated is certainly encouraging, and I trust that our Young brothers who exertions have been so successful in the erection of churches in this parish, will find greater cause for gratitude in their being fitted by devout worshipers.”

It is interesting to note that the area between what is today Cople Parish and Montross was into early 1800’s known as “Nominy Forest.” Although Montross was the county seat, growth in the area was conspicuously slow and inhibited by its character as a forest. In the late 1840’s we find the establishment of St. James Episcopal Church and Andrew Chapel Methodist Church in Montross. This is the opening of forest and the initiation of growth, albeit slow, through housing and business.

Bishop Whittle’s report in the 1890 Journal indicates that the church was consecrated a second time when he states: “Consecrated St. James Church, Montross, Rev. R. A. Castleman, Rector. Preached, confirmed one. This is one of prettiest churches in the Diocese, built in place of one of the ugliest and least attractive.”

The present St. James Church of Montross Parish is located on land conveyed to the trustees of the church by James C. Treakel and Margaret T. Treakle. The building was bricked at the time the Ada Fairfax Chandler Memorial Parish House was added. The parish house, dedicated in December 1951, was of the same construction as the church and attached to it. It provided an auditorium with stage, a kitchen, two restrooms, and four rooms including two in the basement. In 1988 it was enlarged by adding a wing to the east end which eliminated the stage and provided additional Sunday school rooms, a joint parish office, space for library which has not materialized but continues as an additional office space, an enlarged kitchen, a handicapped restroom, an altar guild room, a choir room for practice and vesting. The church seats 128 persons.